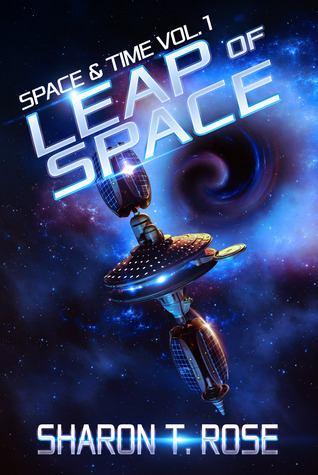 Jregli might be too smart for her own good. She thought that tricking a new Master into buying her would make her life as a slave better, but she didn’t count on Shdr’edno being as clever as she is. He can’t reveal that he owns a slave, but he can punish her for making a fool of him. Jregli learns that some prices are too high, but she can’t back out now.

Station Commander Frank Niem has suspicions about the crafty Yerbrans claiming to be uncle and niece, but running a Space Station keeps his attention elsewhere. Politics and business aren’t what he signed up for, but they’re what he has to deal with. He can’t please everyone, but he has to try or lose his career.

Dozens of Races and thousands of sentient beings pass through Fredan Sector Station 5 every day, and the culture clashes can overwhelm even the best-prepared. Survival favors the bold and the smart, but will that be enough to navigate this Leap of Space?

I couldn’t put it down. Sharon is a great writer. It’s well-written. The characters are great. We are introduced to Jregli and her situation. As you read it you can’t help but root for her. She has help along the way from some very interesting characters. Some of them she can trust some of them she can’t. I can’t wait to read the next book in the series to see where Jregli’s adventures will take her next. I recommend it to others.

Sharon T. Rose is a Writer, a Dreamer, and a Doer of the Impossible. But she didn’t start out that way, oh, no.

Sharon grew up in the military, which did its level best to turn her into a properly-functioning and positively-contributing member of society. Being a little on the thick-headed side, Sharon needed a few decades to realize that she didn’t have the legs for combat boots, but she did eventually wise up and go AWOL. After a decade or so of college and cube farming, Sharon got the bright idea that maybe, just maybe, all those stories banging around in her head weren’t the waste of time The Brass seemed to think they were.

The break for freedom began when Sharon discovered online serial fiction in January 2009. Enveloped in a Blinding Flash of the Obvious (BFO), Sharon quickly set up an account with digitalnovelists.com and began posting stories. It was a ray of sunshine in the dark, dank cellar of the cubes. It was a rebellion. And ultimately, it was rebirth.

Late in 2010, Sharon left the cube farm for the greener pastures of her own imagination. The Brass screamed, the farm condescended, and Sharon put one trembling foot in front of another and made it work. After months of trial and effort, she completed a trilogy, released an ebook, syndicated a serial, sold a short story, and has so many WIPs that she sometimes wonders why she did this in the first place.

Oh, right. Because the stories must be shared.

Her site is located here.