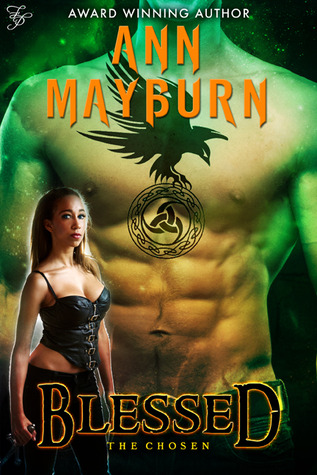 Eliana Shay is an ordinary college girl with an extraordinary birthright. When handsome professor, Aiden Klemenson, sees her, he singles her out as a potential Chosen of the benevolent gods of Creation. He tries to convince Eliana that she is born to do the work of the gods—something unique and powerful. But Eliana’s past doesn’t allow her to have the trust she needs—in Aiden’s gods and the man himself.
Aiden must employ all of his considerable charm to break through her defenses, while trying to keep their relationship strictly platonic. A difficult task when the lush and curvy Eliana’s obvious desire and seductive aura shreds his self-control. Despite his best efforts, desire burns between them with an enchantment all its own.
The gods of Destruction will stop at nothing to keep Eliana from becoming a powerful force against evil. Cunning and deceitful, they send demons and magical serial killers to exterminate her before she can become a Creation god’s Chosen hand on earth. In order to survive, Eliana will have to learn to have faith in her own strength and the warrior who stole her heart.

It’s another great book by Ann. This is the second book I’ve read by Ann and as with the first one I couldn’t put this down either. I love the world she has built with this series. This one has a lot of great twists and turns. No one is who they seem to be. Eliana has a lot to deal with and is learning as she goes in some ways. She is a strong character and a force to be dealt with. I look forward to reading more books by Ann. I would highly recommend this series.

Ann is Queen of the Castle to her wonderful husband and three sons in the mountains of West Virginia. In her past lives she’s been an Import Broker, a Communications Specialist, a US Navy Civilian Contractor, a Bartender/Waitress, and an actor at the Michigan Renaissance Festival. She also spent a summer touring with the Grateful Dead(though she will deny to her children that it ever happened).

From a young age she’s been fascinated by myths and fairytales, and the romance that often was the center of the story. As Ann grew older and her hormones kicked in, she discovered trashy romance novels. Great at first, but she soon grew tired of the endless stories with a big wonderful emotional buildup to really short and crappy sex. Never a big fan of purple prose, throbbing spears of fleshy pleasure and wet honey pots make her giggle, she sought out books that gave the sex scenes in the story just as much detail and plot as everything else-without using cringe worthy euphemisms. This led her to the wonderful world of Erotic Romance, and she’s never looked back.

Now Ann spends her days trying to tune out cartoons playing in the background to get into her ‘sexy space’ and has learned to type one handed while soothing a cranky baby.

Her site is here.