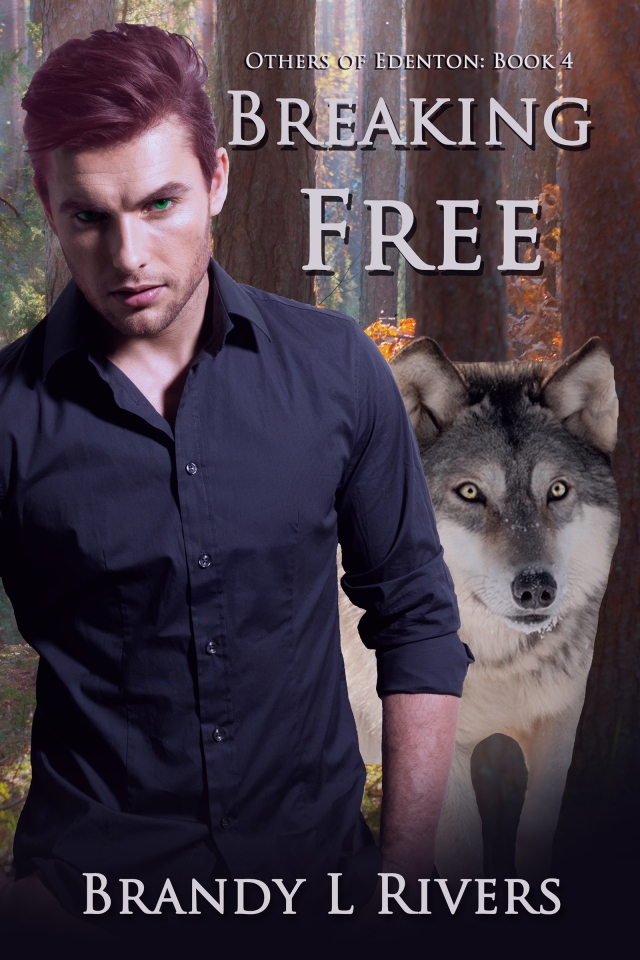 They say that dreams can come true, but as a dreamwalker, Devlin had yet to experience anything but nightmares. Then again, the druid had been held by sadistic vampires and dark mages for twenty years, forced to do their bidding. Newly escaped, he stumbles upon a dreamrealm where he can’t resist a little werewolf.

Jamie just wants someone to call her own. She feels like she’s been waiting for an awfully long time, when a man who teases her memory begins to visit her while she’s dreaming. From the moment she feels his turmoil, she’s drawn in, wanting nothing more than to heal his broken soul.

Before Devlin can decide what to do, he has to make a trip to Edenton. His first goal is to make sure someone who can’t remember him is safe and happy. The little werewolf of his dreams happens to live there, and she’s even more irresistible in real life.

When you’ve been taught all your life to run, what will make you change? Can Jamie convince her mate to stay and fight? Will he risk everything to have what he needs? Or run to save them all? 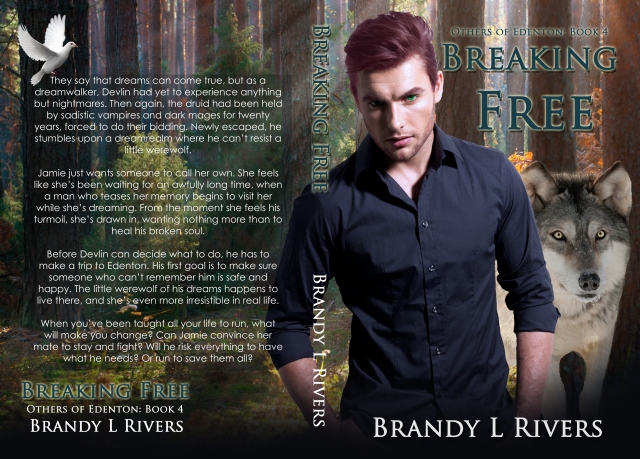 The moon shone bright over a crystal clear lake. Thousands of stars were reflected, like floating diamonds sparkling. The breeze blew gently through red cedar, pine, and maple. The clean mountain air reminded him of camping with his family when he was a boy.
It had been so long since he had the liberty, and desire, to enjoy nature. The water called to Devlin. Carefully, without a sound, he pulled the clothes from his body and placed them on the stump beside him.
With a slow breath, he walked into the gentle ripples, creating larger crests of his own. Warm water greeted him. He dove under, swimming deeper.
A splash caught Devlin’s attention. He broke the surface to find nothing, and no one. Closing his eyes, he reached out with his senses. A lone werewolf was close.
Panic flared through him, and he started for the shore, but a woman surfaced before him. A slow smile spread on her face when he flailed back, splashing her in his surprise.
“Your heart’s pounding.” Amusement sparkled in her pale blue topaz eyes as she placed one small hand over his chest. Warmth washed through him offering a calm he couldn’t remember ever feeling.
Yet, he was terrified the Dales were tracking him. A dream, nothing more than a dream. They can’t find me, he reminded himself.
“You startled me,” Devlin replied.
“Hmm.” Her foot brushed against his calf, sending a shiver through his entire body. She tapped her finger to her chin. “You remind me of someone, but I can’t figure out who.”
Intrigued, and certainly heading toward aroused, he asked, “What makes you say that?”
One corner of her shiny pink mouth lifted impishly. “Don’t know, but you do.” Her voice had taken on a husky purr which effectively made his blood pump faster.
A dream, just a dream, he told himself. Then he did something bold, something he hadn’t done in so long he was sure he’d fail, even in a fantasy. “What’s a sweet little wolf like you doing out here all alone?”
Her giggle was melodic as her already dazzling eyes lit up. “Looking for love in all the wrong places.”
As if on cue, his resistance broke. Her tiny waist fit perfectly in his hands, her hips flared in a way that made him groan. Devlin propelled them closer to the shore, until his feet touched bottom.
Before he could make his move, her legs locked around his hips and her fingers caressed up his shoulder and neck to delve into his hair. She grazed her lips over his. Afraid to take things too far, he slid his hands up her back, pressing her full breasts against his chest.
Needing more of her taste, he deepened their kiss. Devlin felt more alive than he could remember. A dream, just a blasted dream, his brain chimed in. The knowledge didn’t stop him from sweeping his tongue into her mouth when she opened to him.
Her body undulated in tune with his, and her heated core slid against his hardened length. The urge to bury himself in her was too much.
Pulling back, he panted, “Your name? Need your name, Precious.”
“Precious?” She licked her lips as she stared back at him with something like awe in her big blue eyes.
He tipped his forehead to hers and breathed in her wild but seductive scent. “You’ve set me free of my old life. You’ve given me something to look forward to.” He didn’t know where the words came from, but he didn’t dare take them back. They felt right.
“Jamie Abrams. You better come to me.” There was a command hidden in her sweet sassy voice, one he truly wanted to obey. “I’ll be waiting.”
He nodded, rolling her name through his head like a fine wine over his tongue. 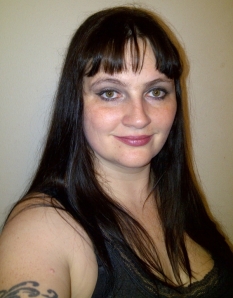 Brandy L Rivers is the author of the Others of Edenton Series. There are more Others of Edenton in the works. She is also working on the first couple books in the Others of Seattle series.
As an avid reader, Brandy has always loved writing. She became serious about it as a stay-at-home-mother. She has a file full of manuscripts she plans to edit and put out there eventually.
She lives in Western Washington with her husband and three kids, where she is already working on the future stories in the series.