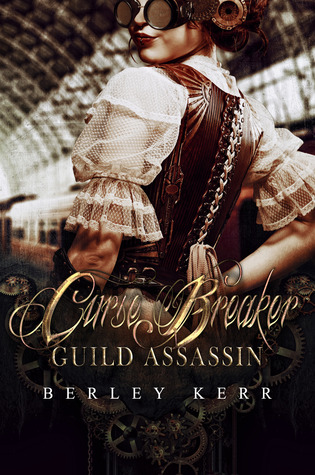 Wendy Magdalena Braca lived in a Victorian mansion under three moons in Jupiter City. But her privileged upbringing falters when after the death of her father and the murder of her mother, she is shipped away to Greenleaf Asylum for Troubled Girls and lived there for years until she is “rescued” by a strange guild that shows Wendy their world; the world of Guild Assassins made up of the Cæcus (normal humans), the Validus (magic-users), and Half-Breeds (demi-gods). In this world, Wendy discovers she is the most special and powerful Validus known to exist, the Curse Breaker.

I was very impressed with the book. I started reading it and couldn’t put it down. The characters and the world are great. There are some great twists and turns.  I would highly recommend it to others. I look forward to reading more of Berley’s books.

Berley Elston Gordon Kerr III first answered the call to write while he was in his high school creative writing class. What he had originally hoped would turn into a career developing stories for role playing games evolved into a love of writing science fiction and fantasy novels as well as short stories. After spending over ten years writing novels and collecting rejection letters Berley finally got his big break with Curse Breaker: Guild Assassin.

Berley holds a Bachelor’s Degree in English from California State University, Northridge and currently lives in Los Angeles, California. When he’s not reading or writing, he’s either at the movies,at the beach, at some local comic book store or somewhere in Southern California hanging out with his friends.

Check out his site here.