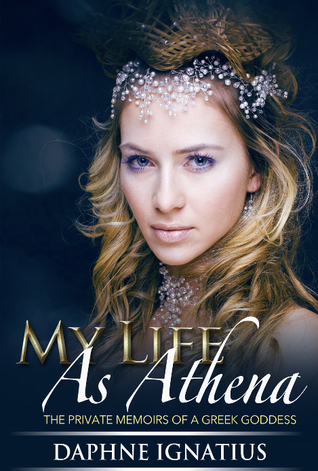 Athena, Goddess of Wisdom and Warcraft. Brilliant, strong and pure. Well… two out of three isn’t bad.
Denied a normal childhood, Athena springs out of her father’s head, fully-grown but with no real world experience. Discounted by the other gods as young and female, Athena fights to prove herself and win her independence, although not always with the results she wanted.

When she wins patronage of the city of Athens in a battle of wits, Athena comes into her own and becomes the brilliant goddess that we know from legend. However, the legends themselves have been sanitized, and behind them lurks a darker story in which Athena must make difficult choices to protect herself and those she loves.

The golden days of ancient Greece are eventually threatened by a new military power growing in the west. When the Roman legions arrive, greedy for Greece’s wealth and offering to adopt the Greek gods as their own, Athena and her fellow gods have a fascinating choice to make: Do they stand by the Greek people, or betray them to safeguard their own interests? In defiance of her father’s wishes, Athena sets forth to change the course of human history itself.

Daphne is a great writer. I loved it. I couldn’t put it down. The characters and the world she has created are great. Readers who love mythology will love this one. It’s the story of Athena. You will be sucked in from the first page. It has great twists and turns to keep the reader turning the page. Add it to your TBR list you won’t be disappointed. I look forward to reading more of Daphne’s books.

Daphne Ignatius was born and raised in Malaysia. She attended the University of Kansas, where she earned a Bachelor’s Degree in Computer Engineering and a Masters in Business Administration. The daughter of two high school teachers, she was instilled with a love of the written word at an early age, and set down her first short story in illegible longhand at eight years old. Her earliest remembered ambition was to become an author, and that desire resurfaced during an existential crisis, resulting in this novel.

Daphne currently lives in Atlanta, Georgia with her beloved spouse, where she works by day as an Information Technology professional. Her existential crisis continues profitably with her next work, tentatively titled Tales from a Dragon Clan.

For more information about Daphne and her books, check out her site here.