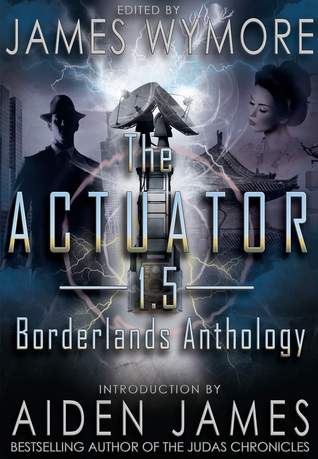 When the Actuator breaks the earth into a patchwork of altered realities, the remaining Machine Monks begin looking for the Keys to put it back. In the meantime, everyone in the world has been transformed without knowing why. This collection tells about some of the people struggling to deal with the change.

In “Remembering Emily,” by Sara Wolf, Daniel must rescue his distant girlfriend from danger. Worse, she might forget him.

Matthew Cox explores Cyberpunked China in “Stolen Orchid,” where a man finds his wife has become a ghost. His only hope is to cross the border to an unfamiliar realm.

In “The Blackbird’s Tale,” Dan Willis tells of a Machine Monk named David, who works his way through Chicago’s noir scene to find an Actuator Key.

Nathan Yocum gives us “The Dream Journal of Oren Smith Wessely,” in steampunk Arizona where his dreams suddenly come to life.

Mara Valderran’s “The Austenation” crosses Pride and Prejudice with werewolves so the young heroine is forced to do the unthinkable and take matters into her own hands.

In “Escape,” by Patrick Burdine, a group of teenagers are caught in a motherless town where all the fathers have turned into faceless, soul-sucking monsters.

“The Ritual,” by Whitney Trang, is a haunted house in Japan where a ghost seeks to sacrifice a young woman’s sister to save his family.

“The Gatekeepers of Change” is James Pratt’s chronicle of the awakening of great power in a man preparing to enact terrible plans.

“The Ringer” is Craig Nybo’s tale about a detective in New Orleans facing zombies and other undead monsters as he assists a client in taking on her crime lord husband.

A Soviet soldier guarding Chernobyl, in Jason Purdy’s “Anna and Lena,” must escape the poisoning by crossing an unknown border.

Jenny Persson brings us a teen in Viking Sweden in “Once upon a Frozen North,” who looks to the steampunk airships just across the border as a means for her escape.

Jay Wilburn tells of drug addicted Travis, in “Halfway,” who finds the sanctuary of the sanitarium suddenly turns violent.

The author Juhi’s “The Search for Punarnav” takes us to India, where a man seeks to become a healer despite the dangerous Hindu mythologies suddenly made real.

Jason A. Anderson brings us “15 Seconds of Fame,” in Steampunk London where a detective risks everything to save a child from her mob boss father.

In “Forever Young,” Wilbert Stanton explores the fate of an old man who finds himself young again, after paying his life’s savings to gain admission into an exclusive realm.

Finally, James Wymore’s tale, “Cult of the Actuation,” continues the story from book 1, as Dragon Star takes on religious zealots, organized in the wake of the Change, who have taken one of the Machine Monks captive.

It has stories that will appeal to all types of readers. I couldn’t put it down. I love all the stories in it. Each story has great characters that the authors have created. There are great twists and turns within each one of them. Add it to your TBR list you won’t be disappointed. I look forward to reading more books by each of the authors.