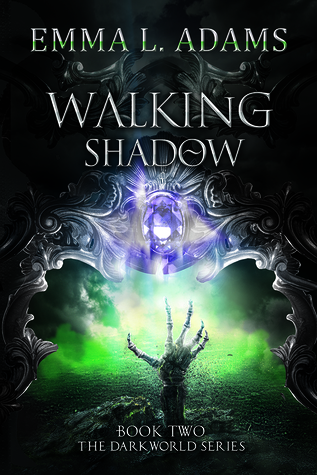 When you have a connection to the Darkworld, nowhere is truly safe.

Ashlyn has found a new home in Blackstone, but when a spate of grave robberies across the country spark fears that someone is practicing illegal sorcery, she comes under the radar of the Venantium, the protectors of the Barrier between her world and the Darkworld, who are suspicious of any sorcerer unaware of their origins.

The trouble is, what Ash does know might just get her killed.

Sufferers of the dangerous condition known as the vampire’s curse are being brutally killed, and the latest victim is Leo’s guardian, the ex-head of the Venantium. Ash determines to help Leo find out what’s really going on, but it isn’t long before events are spiralling out of control. The dead are rising from their graves, and the barriers around Blackstone are threatened by a demon which looks exactly like Ash herself…

Another great installment of the DarkWorld series. I couldn’t put it down. Great characters and love the world that has been created. Great twists and turns that will keep readers turning the page. Readers who love YA urban fantasy will want to read to add it and the rest of the books in the series to their TBR list. I look forward to reading more of Emma’s books.

Now a reluctant graduate, Emma refuses to settle down and be normal. When not embarking on wild excursions and writing fantasy novels, she edits and proofreads novels for various publishing houses and reads an improbable number of books. Emma is currently working on the Alliance series, a multiple-universe adult fantasy featuring magic, monsters, cool gadgets and sarcasm. Her upper-YA urban fantasy Darkworld series is published by Curiosity Quills Press.

Want to be the first to hear about my new books? Sign up to my author newsletter here: http://weebly.us7.list-manage1.com/su…