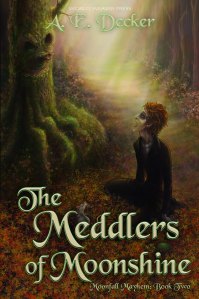 Contact:
publicist@worldweaverbooks.com
FOR IMMEDIATE RELEASE, PLEASE
“THE MEDDLERS OF MOONSHINE”
BY A. E. DECKER

Albuquerque, NM (August 24, 2016) – World Weaver Press has announced The Meddlers of Moonshine, the upcoming fantasy novel by A. E. Decker, and second book in the Moonfall Mayhem series, will be released October 25, 2016.

Something is rotten in the town of Widget, and Rags-n-Bones knows it’s all his fault. Ever since he snitched that avocado from Miss Ascot’s pack, things have been going wrong. Armed with a handful of memories he never realized he had, Rags-n-Bones searches for a way to put right whatever he did to Widget in the past. If only he knew what it was! Unfortunately, the only person who seems to have answers is a half-mad youth that only Rags can see.
Widget is also suffering from a ghost infestation that has the townsfolk almost as spooked of outsiders as they are of actual spooks. While Rags-n-Bones seeks answers in the past, Ascot offers the town leaders her service as an exorcist, only to be handed an ultimatum: banish the ghosts or be banished herself!
Who’s meddling with Widget? To catch the culprit, Ascot and Rags-n-Bones must match wits with a shifty sorcerer, a prissy ex-governess, and a troublingly attractive captain before the town consigns itself to the graveyard of history.

Praise for the MOONFALL MAYHEM series:
“Falling of the Moon is a fantasy fairytale like nothing I have read before. Mystery and secrets take you to a fantastic mystical world sure to have a book two. It is Pirates of the Caribbean meets Cinderella. Looking forward to Ascot’s next adventure. Strong and determined with her loyal friends she will certainly make the Moonfall Mayhem a great series of books. I am ecstatic that this is just the start to what will be a truly great trilogy.”
— Girl + Book
“I’d say it’s like Shrek meets The Wizard of Oz if Dorothy were Wednesday Addams and Toto a talking cat with bat wings. Fun and funny with many laugh-out-loud moments. Can’t wait for the next book in the series!”
— Susan Sullivan, Author of the Cleo Tidwell Paranormal Mystery series
“A unique and clever fantasy, The Falling of the Moon is a thoroughly entertaining read from first page to last. Very highly recommended and certain to be an enduring favorite.”
—Midwest Book Review

The Meddlers of Moonshine will be available in trade paperback and ebook via Amazon.com, Barnesandnoble.com, World Weaver Press, and other online retailers, and for wholesale through Ingram.
Comparable Titles:
Fairest by Gail Carson Levine
A Tale Dark and Grimm by Adam Gidwitz
The Fairy Godmother (Tales of the Five Hundred Kingdoms series) by Mercedes Lackey
Princess of the Midnight Ball by Jessica Day George
The Princess Bride by William Goldman
A. E. Decker hails from Pennsylvania. A former doll-maker and ESL tutor, she earned a master’s degree in history, where she developed a love of turning old stories upside-down to see what fell out of them. This led in turn to the writing of her YA novel, The Falling of the Moon. A graduate of Odyssey 2011, her short fiction has appeared in such venues as Beneath Ceaseless Skies, Fireside Magazine, and in World Weaver Press’s own Specter Spectacular. Like all writers, she is owned by three cats. Come visit her, her cats, and her fur Daleks at wordsmeetworld.com.
World Weaver Press is an independently owned publisher of fantasy, paranormal, and science fiction. We believe in great storytelling.
Publication Date: October 25, 2016 • Fantasy • Young Adult $14.95 trade paperback, 337 pages • $4.99 ebook ISBN-13: 978-0-9977888-3-9 Publicity/Reviews: publicist@worldweaverbooks.com Information: http://www.worldweaverpress.com/store/p119/Meddlers_of_Moonshine.html
# # # # #
worldweaverpress.com
@WorldWeaver_wwp

New cover for Book 1 in the series: 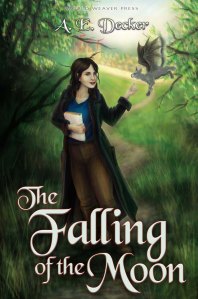