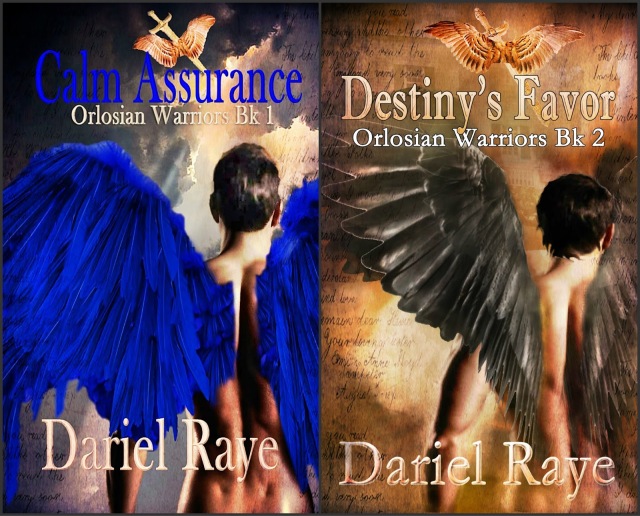 When Asriel – Orlosian Warrior, descendant of Nephilim, law enforcer – is sent to guard Malina, a human with a penchant for drawing trouble like a tornado, she becomes his obsession.

With no hope of finding love in his dimension, he breaks the cardinal rule, leaving his home to protect her, but she has also drawn the attention of his enemies, and he is forced to face demons from his past. If Asriel chooses to stay with Malina, not only does he risk forfeiting his right to ever return to his dimension, but he will need her blood to survive. 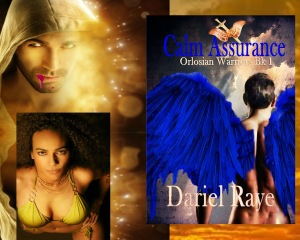 His world shifted the moment she was born. Now, nothing can stop him from making her his…

Imagine a man who looks like an angel, wings and all. What would you do if you met such a man, and he told you that he exists for only one purpose, to claim you and only you?

Destiny Carter is a feisty, take-charge, Rubenesque beauty with a tough façade. She finds herself caught in that age-old quandary of always being the bridesmaid but never the bride. A string of lackluster relationships leaves her hopeless and ready to settle for whatever comes along, until she meets Japheth, the man her fiancé claims is his best friend. Japheth’s arrival is heralded by an attack on Destiny’s life, but somehow, from some instinct deep within her, she knows this is only the beginning.

Born more than 200 years ago, Japheth looks like an angel, but he’s far from it. In his world, the ratio of men to women is 500 to 1, and although he’s a superior being, he’s willing to break the most sacred law of his brothers, even to drink human blood, if it means having the one that he believes is meant for him alone. When he meets Destiny, he knows she’s the one he’s been searching for. To claim her, though, Japheth will have to betray a friend, risk his life, and, perhaps hardest of all, humble himself enough to win her love.

Still too far away to get a good look at the legendary J, Destiny watched the two men pull each other into a brief man hug. As she did, her mind wandered back to her conversation with Memaw: “Destiny, you be extra careful the next few days, okay? Memaw’s got a feeling.” She wondered what all the sudden drama was about, especially since she was always careful. The older woman was always right, though, so she couldn’t help glancing around cautiously as she walked. Memaw had said those same words to her the night she was attacked, so it was always good to heed her advice, always better to be safe than sorry.

J bent to pick up his one bag, and before she could even close the gap between them, they were heading back toward her.

Destiny overheard part of their conversation as they neared: “Man, I know it’s after two and all, but I’ve never seen people sleepin’ at a bus station like this before. I swear, everybody’s laid out but you.” She also couldn’t help but notice J’s striking gait as he stalked closer, almost graceful but with a natural swagger. All jungle cat in a man’s body, was the only thought that came to mind. Realizing that she was staring far too much, she dragged her gaze from Robert’s friend and surveyed the station, but she was still hesitant to stop admiring him. Something about the way he moved sent a jolt of energy rushing through her, punching her guilt button in the process. Surely, she and Robert were not a match made in Heaven, but that certainly didn’t make it okay to have the thoughts she was having about his best friend.

Even during that beautiful season of the year, the dreary bus station looked and felt dank, grim, and hopeless. The floodlights, although strategically placed, barely pierced the darkness, and the skinny trees left over from the last time anyone cared reminded her of how she really felt about being alone.

A sudden blur of movement caught Destiny’s attention as they walked on, and fear and nausea invaded her, welling up from their hiding places. A tall, dark figure rushed toward her, his hands reaching out like claws, eager to grab her. Time stood still as waves of nausea struck, rendering her unable to move, a predicament she’d never found herself in until that reality-changing attack.

Destiny stumbled and fell to the ground. Every one of her survival instincts kicked in, and she was ready to fight if necessary, but just as quickly as the shadow appeared, it was gone. The station was eerily quiet and still again, and she found herself standing there, with no memory of getting up from the ground. She glanced around, checking all sides, then turned to face Robert and J as they stopped in front of her as if nothing had happened.

“Baby, this is Japheth Danaelson, J. J, this is Destiny Carter, my fiancé,” Robert casually said.

She tried to dismiss the hazy monster as nothing more than a flashback, but subconsciously, she knew better; Destiny was convinced that something really had just tried to attack her again, even if it did stop in its tracks and vanish. Despite her disorientation, wobbly knees, and the feeling that she had somehow skipped through time, and despite the fact that her mind was now reeling with doubt over what she’d just seen, Japheth’s presence overshadowed everything else. Up close, he was absolutely breathtaking. 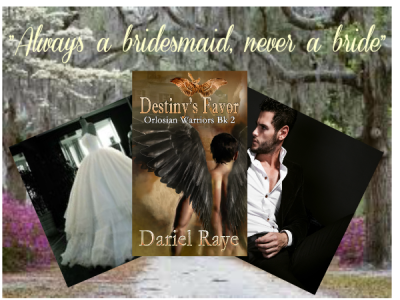 Dariel Raye is an animal lover, animal rights activist, musician, and award-winning author of powerful paranormal romance and dark urban fantasy with IR/MC (Interracial/Multi-cultural) alpha male heroes to die for, and strong heroines with hearts worth winning. She fell in love with books and started reciting stories at the age of 3. A counseling psychologist, classically trained vocalist, and pianist, she plays over 11 musical instruments, and naturally incorporates behavioral psychology into her characters. Her stories tell of shifters, vamps, angels, demons, and fey (the Vodouin variety). She is also a Netflix paranormal TV series binger. 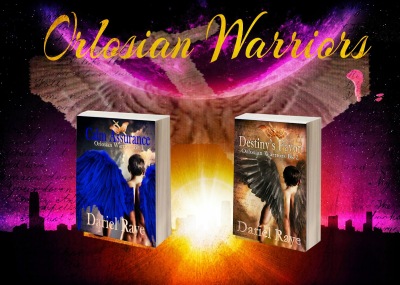 ← Grimm Remains by Eli Celata
Cover Reveal: The Battle For Earth by AJ and CS Sparber →