The wait is over!
STOLEN WISH, the fifth book in the Blood Realm Series is now available! 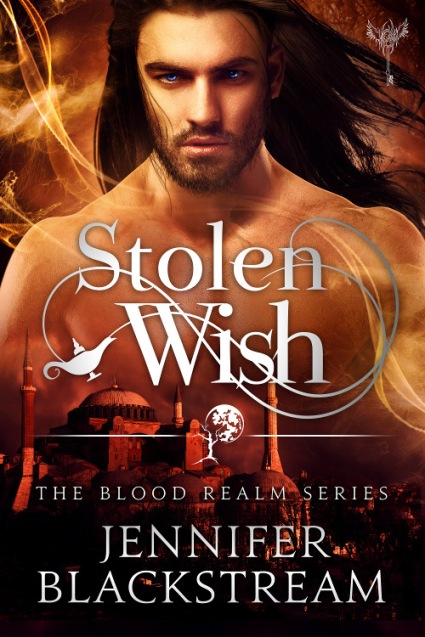 Stolen Wish
(The Blood Realm Series, Bk #5)
by Jennifer Blackstream
Blurb:
PRIDE MAKES HIM BOLD ENOUGH TO COVET HER
Ali is a notorious thief, skilled enough to steal whatever his heart desires—except what it desires most. Anara. His fellow criminal would never let him get so close if she suspected he knew who she truly was. But a man can only resist temptation for so long…
PREJUDICE CANNOT HIDE PASSION FOREVER
Princess Anara is a tiger shifter obsessed with redeeming her race. With fierce determination, she’s stealing back the sacred objects of her people, the loss of which cost them the ability to safely convert their mates. Nothing and no one will stand in her way—not even a relentless thief who sees more than he should, and says more than she’s ready to hear…
DUTY AND LOVE BOTH DEMAND SACRIFICE
A dark sorcerer inadvertently gives Ali the leverage he needs to demand Anara’s hand in marriage. He’ll get the wife he’s coveted for so many years, and she will get the chance to finally explore the passion that she’s denied herself for too long. But even with a djinn’s magic at their fingertips, happiness is no guarantee. That which is easily gained is just as easily lost. If they want a future together, they’ll have to fight for it…

Available for purchase at

Anara slid into the shadow cast by a large pillar, stilling her breath as she scanned her surroundings. Visconti Malik’s cavernous home was empty on this level, none of the current occupants trusted to be in the showroom when their master was away.

The cool tile chilled her back through her cloak as she held still, reaching inside herself for her other half. Her beast stirred, a tiger’s soft golden head rising, opening shining green eyes. Three high-arched doorways on either side of her gave a breathtaking view of the city around the hilltop, but she ignored it, focusing instead on the surrounding room. The massive pillars could be hiding anyone.

Her nostrils flared, parsing out the myriad of scents that swirled in the wind. The ghost of the night’s dinner still hung in the air in a perfume of figs, pomegranates, goat meat, and barley. Underneath that slept the scent of the treasure the visconti loved so much, bragged of so often. And still below that was another scent. One that did not belong.

Masculine. Sand. The sharp scent of clothing dye. And a familiar hint of foolhardy excitement.

A smile spread over her lips. She knew that scent. Knew the man it belonged to. Her stomach fluttered in excitement as she remained hidden behind the pillar, waiting for the soft footsteps to pass her hiding place.

Ali was silent for a human, she would allow him that. But a weretiger’s senses were unrivaled, and she would have heard the slap of his bare feet on the tile even if he had been moving as cautiously as he should have been. She shook her head, stalking him as he approached the far wall where the treasures glittered on rows of pedestals.

Anara froze, her hand hovering over his shoulder. Irritation furrowed her brow, and she crossed her arms. “How did you hear me?” she demanded in a whisper.

Ali jumped, whirling around in midair and nearly dropping the gold rhyton he held in his hands. Blue eyes opened so wide they caught the moonlight, turning his irises into crystal pools of light. The silky black hair hanging to his shoulders framed those eyes, made them all the brighter for the shadows that bathed the sides of his face. Anara dug her fingernails into her palm, resisting the urge to touch a lock of that hair, see if it was as soft as it looked.

He exhaled a deep breath, muscled shoulders sagging under the thin material of his caftan. “Habibi, you scared a year off my life. Why would you do such a thing?”

Her eyes narrowed. “You were talking to the rhyton, weren’t you?” She drummed her fingers along her biceps and lifted her chin in pretended offense. “What a fool I was to think I was the beautiful one you were greeting.”

A grin spread over Ali’s mouth, and he rolled the treasure down his arm, carelessly flinging it to his other hand as he focused on her. The intricately carved head of a ram seemed to flash its disapproval as Ali raised the cup in a mock toast. “Had I known you were here, I would not have wasted those words on a meaningless trinket such as this. You are the true treasure here.”

As always, Anara found his smile infectious, and soon she was returning his grin even as she tsked at him. “If you’re wasting your time with baubles such as that, then you are ignorant of the visconti’s greatest wealth.”

Blue eyes glittered with renewed greed as he replaced the rhyton on its pedestal. “Oh?”

Anara cast a glance around to make certain they hadn’t disturbed the sleeping servants. The large room was open, security depending on the palace’s strategic placement atop a hill and the knowledge that anyone suspected of stealing from the visconti would suffer for a long time before he died. Malik was too proud of his treasures and his wealth to lock it away, and he clearly felt that the level of torture and violence he leveled on would-be thieves was more than enough to make up for his audacity. Anara said a prayer of gratitude for his foolishness as she redirected her attention to the locked door that led to the interior of the home.

She took a careful step toward the door, her senses alert for any sound that might mean they were in danger of getting caught. The huge space remained empty, not a hint of sound bouncing off the gold and cerulean tiles that lined the floors, walls, and ceilings. With a wink at Ali, she resumed her original quest.

He followed her lead, trailing without a trace of the pride that so often hobbled other men. It was perhaps his greatest quality, his ability to put practicality above pride. A very rare quality.

“And what precious secrets is Malik hiding, then?” Ali whispered.

“If you would do proper research instead of just grabbing whatever shiny object catches your fancy, then you would know. Now be silent.”

The door’s lock gave way under the careful application of the slender tools Anara had crafted herself. Together, they snuck inside and made their way down the short hallway, going left when it came to a T.

The scent of rich ink, expensive thread, and the unmistakable mustiness of a space with no windows guided Anara until she came to the room she’d been looking for. Polished tile cover the walls and ceiling as in the other rooms, but this alcove boasted comfortable pillows and cushions for lounging, and expensive silks and tapestries broke up the endless shining tiles. A room meant for entertaining. For impressing.

Anara kept her eyes on the tapestry at the far end, its vibrant threads depicting a majestic Roc holding one of its precious eggs, its wings turned to burning red embers by the glorious, intricate stitching of a setting sun. She stepped around the various seating arrangements, her heart beating faster as she approached her goal.

Her fingers had just brushed the wall-hanging when Ali’s body heat washed over her back. Anara blinked and paused, her nerves tingling with the pleasant awareness of Ali’s proximity. It wasn’t the first time he’d invaded her space, and once again she reflected that if he knew that the veil she wore was not just a means of hiding her identity during her nocturnal activities, but a means to prevent anyone from looking on the face of the sultan’s daughter—he would never dare to stand so close to her. No man did.

But he didn’t know. And he must never know.

“Have you forgotten what you’re looking for?” he murmured.

The words were another curl of heat into the air, and he shifted closer. Anara realized she was holding her breath, concentrating on the gentle press of his chest against her back. The tingling in her nerves turned to a crackle, and she quickly snuffed it out.

“I have not forgotten. I am waiting for you to realize your complete disrespect for my personal space.” She kept her voice light, gently recriminating.

An inhale right next to her ear startled her, and she jerked her head to the side, prevented from seeing him by the hood of her cloak.

She pressed her lips together and turned enough to face him, narrowing her eyes at the wicked smirk on his face.

“You smell of wine. Perhaps you could refrain from breathing on me so at least one of us can keep a clear head?”

His blue eyes darkened and he stepped forward, crowding her and prompting her to tilt her face up to keep meeting his eyes or else step back in retreat. Her tiger raised its head, eyeing the man before her with burgeoning interest. Ali leaned closer, filling her senses with his unique scent. Her pulse throbbed as he stopped with his mouth an inch from her ear.

“Am I making it difficult for you to keep a clear head? Perhaps you’ll join me for a drink so I can…apologize?”

Jennifer Blackstream is a USA Today bestselling author of fantasy/paranormal romance. Urban Fantasy will soon be joining her repertoire, and if she doesn’t get hold of the insidious roving gang of plot bunnies, there’s going to be steampunk sprinkled in there too…
To date, Jennifer has two series:
BLOOD PRINCE SERIES (COMPLETE):
Book 1 – Before Midnight
Book 2 – One Bite
Book 3 – Golden Stair
Book 4 – Divine Scales
Book 5 – Beautiful Salvation
Bonus Adventures in the Blood Prince World:
Book 2.5 – What Big Teeth You Have (free when you sign up for mailing list mentioned below)
Book 4.5 – The Pirate’s Witch
Book 5.5 – Dead to Begin With (available only between Thanksgiving and whenever Jennifer takes her Christmas tree down)
BLOOD REALM SERIES (IN PROGRESS SPIN-OFF OF BLOOD PRINCE SERIES):
Book 1 – All for a Rose
Book 2 – Blue Voodoo
Book 3 – The Archer
For news, new releases, and a free copy of What Big Teeth You Have, sign up for Jennifer’s mailing list.
Jennifer has unfailing affection for the authors who have influenced her, including Laurell K. Hamilton, Jim Butcher, and the sorely missed Sir Terry Pratchett. Her books include humor, romance, and action, with enough darkness to keep things very interesting.
When Jennifer isn’t writing, she can be found re-watching Boondock Saints, Noises Off, or Gross Pointe Blank. With one of those classics in the background, she might also be searching Amazon for something she wants, but doesn’t need (Is there any such thing as a kitchen gadget that isn’t an absolute necessity? And don’t even get me started on office supplies…).
You can find Jennifer at