Haunting Magic
(The Witches of New Mourne, book 2)
by Neely Powell
Blurb:
Fiona Burns is a witch who sees dead people. Bailey Powers sees her as the next cable star—and a fake. Even so, she’s tempted by the dynamic producer in more ways than one.
But she has a big distraction—a vicious curse on her family coven.
The ghosts of New Mourne warn of the return of the Woman in White, a vengeful spirit who claims the life of a Connelly witch from every generation. In fighting back, Fiona unwittingly fuels the demonic forces, and black magic brings death and heartbreak to her family.
Initially a skeptic, Bailey is soon caught up in her supernatural battle with forces of evil. He’s also beginning to think Fiona can help him escape his haunting past.
With magic and mayhem at war and survival on the line, the Witches of New Mourne face a new challenge from their ancient foe. Will another generation fall? Or does the curse end here?

Overgrown weeds covered the back of cemetery. In the deepening gloom, Fiona stumbled over a stump. The baby’s screams filled her head. She had to help this child.

The grave markers in the back of the cemetery were the oldest ones. Some of them were so weathered it was impossible to read the names and dates on them. When they reached the back corner, Fiona knelt. All she could hear was the baby’s cry.

She dug through the weeds and scruff in front of her, ignoring the sting of thorns on her hands. Bailey dug with her, and soon she touched the cool stone of a broken grave marker.

“Baby MacCuindliss” was carved in uneven letters deep in the stone.

“This is the Woman in White’s baby.” Fiona traced the name on the marker with tender fingers. “Please don’t cry,” she whispered. “I’ll try to find your mother, I promise.”

The baby’s cry faded to a whimper. The mist blew away, leaving Fiona and Bailey under a canopy of threatening clouds.

Lightning streaked over the mountains, and the ominous stink of sulfur infused the air.

The Witches of New Mourne Series 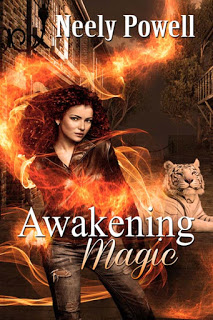 Purchase at
Kindle | Amazon Paperback | Nook | Kobo
About The Author

Neely Powell is the pseudonym for co-writers Leigh Neely and Jan Hamilton Powell. Long-time friends, they’re the authors of “The Witches of New Mourne” a paranormal series about a family coven, a centuries’ old curse and an enchanted town. AWAKENING MAGIC is available from The Wild Rose Press, and now HAUNTING MAGIC continues the story. Their first paranormal novel, TRUE NATURE, is also available from The Wild Rose Press.
Website | Facebook | Twitter | Goodreads | Pinterest | Amazon
Giveaway
a Rafflecopter giveaway
https://widget-prime.rafflecopter.com/launch.js