“Stacy Allen’s debut novel has it all–an intriguing ancient puzzle, a modern-day treasure hunt, suspense, and most of all, a thrilling romance. Clear your schedule, because you won’t want to put this one down.”~#1 New York Times bestselling author Susan Wiggs ! 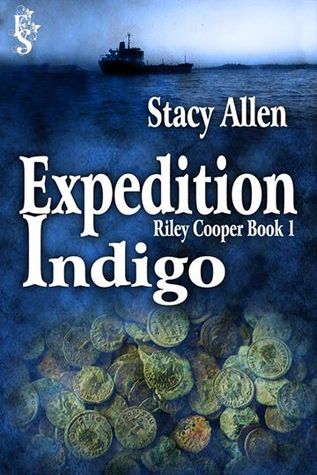 Blurb:
Archaeologist Riley Cooper is offered the chance of a lifetime: a chance to find the Crux Fidelis, the coronation cross of Charlemagne. Under Water Sea Adventures members believe they have found the remains of the Indigo, a heavily laden cargo ship commissioned by Charlemagne and presumed lost on its maiden voyage off the coast of southern Italy in the early 800s. If Riley can find the cross, it will prove Charlemagne’s coronation as the First Holy Roman Emperor by Pope Leo III on Christmas Day had not been a spontaneous act, but rather a desperate political maneuver by a Pope in need of protection.
When Riley joins UWSA off the coast of Sorrento, Italy, tensions and tempers fly as a competing team arrives in search of the treasure and an approaching hurricane gains strength and heads straight toward the dive site. And when one of the crew is murdered, Riley must find the strength to fight back and keep the treasure out of the other team’s hands.

Great book. I couldn’t put it down. It’s a real page turner. I love the characters that Stacy has created. It has great twists and turns. It’s a great start to a series. There’s suspense, intrigue, and romance thrown into the mix. It makes for a very enjoyable read. I highly recommend it to those readers who love a romance with suspense. It won’t disappoint. It’s one of those to be added to your TBR list. I look forward to reading more of Stacy’s books.

About the Author:
Stacy’s passion for adventure has taken her to five continents to explore over fifty countries. Stacy also plays guitar and sings, when she isn’t traveling around the world in search of new locales and new stories.
Stacy served on the Board of Trustees of the Pacific Northwest Writers Association, the Pacific Northwest Mystery Writers of America chapter, and currently serves as Vice President of the Southeast Mystery Writers of America (SEMWA) chapter. She lives in Georgia with her husband and a very large house cat named Valentino.