The streets of Safed were crowded with tourists and locals mingling, laughing, buying and selling. Scholars sitting in cafes, studying Kabballah or arguing about football or politics. Tourists taking photographs. Little boys in peyot and skullcaps kicking balls around, posing for photographs. Grown men with dark coats, black hats, and long beards in earnest conversation. Some hiding their faces from the tourists with the cameras.

As Miri walked she thought about the scene that she’d uncovered from the book. So that’s how it happened—how Omama had escaped from the Nazis. She wished she could talk to her, ask her all the questions that were burning inside her. Why had Omama kept her magic a secret from Miri through all the years she was growing up?

Miri had a few shekels in the pocket of her skirt. She walked up to a falafel stand.

She hoped she’d asked for half a falafel. Miri had learned a few words of Hebrew in the weeks she’d been in Israel. Not many though, not enough. Her thoughts strayed back to the book, the purple book with Argentum on the cover. She should go back and try to decode more of the words. But it was hard, so hard.

Hebrew was grueling. She’d flirted with French in Saul Emmanuel, but Hebrew was a different animal altogether. She stumbled over the unfamiliar characters in frustration. As a small child, reading English had come easy to her. She had devoured stories from an early age. Here everything was stilted and difficult. It frustrated her to pick up a newspaper and not just be able to scan the headlines. If she applied herself, she might be able to decipher a word or two.

As she reentered the Hakessem compound, a young girl greeted her. She was eleven years old and had her dark brown hair tied in two long braids. “How was your class with Abba, Miri?” she asked.

“It was good, Rifka, I was able to read the beginning of my book.”

“Later, maybe.” Celia’s words seemed so personal. Now that she’d unlocked the first scene, she already felt she understood so much more. The Rabbi had said she could share the stories with Rifka, that in fact it was important to do so lest they be forgotten, but Miri wasn’t sure she was ready to share. 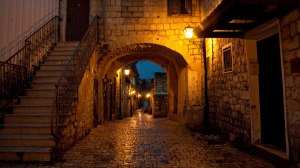 One thought on “Umbrae by Debbie Manber Kupfer”